Currently a booming metropolitan and top tourist destination, Fort Lauderdale has had architecture at the chore of its development. The “New River Settlement” got its new name from a series of defensive forts built during the Seminole war. The city has since transitioned into a major tourism and transport centre, earning titles like “The Venice of America” and “The Yachting Capital of the World”.

Like other cities in South Florida, Fort Lauderdale’s pristine warm climate, sandy beaches and holiday lifestyle have made it an attraction to the rich and famous who have set up impressive luxurious houses and mansions designed by famous Fort Lauderdale Architects. The city boasts an impressive architectural scene with an array of styles and designs.

Fort Lauderdale is a city that has grown through various periods, and these have all had an impact in the architectural styles. As the residents flourished and their family needs grew, most of the building had to undergo reconstructions, and these were based on the style dominant at the time. As a result, most houses reflect various periods and cannot therefore be easily labelled as belonging to a certain style.

That having been said, the most dominant style is perhaps the Mid-century modern style with its relaxed, cool and confidently modern vibes. Fuelled by Modernists such as Walter Gropius and Eero Saarinen, this style utilized relatively inexpensive material, meaning it could be used for the rapidly developing suburbs as well as the grand downtown buildings.

The style mainly features angular details, flat roofs and asymmetrical profiles, together with a clever marrying the indoor and outdoor spaces. Owing to the beautiful scenery and cool atmosphere of Fort Lauderdale, it is no surprise most people opt for the Mid-century modern style. Examples of some buildings with this style include landmarks such as Pier Sixty-Six, Las Olas Boulevard and the KenAnn Building. 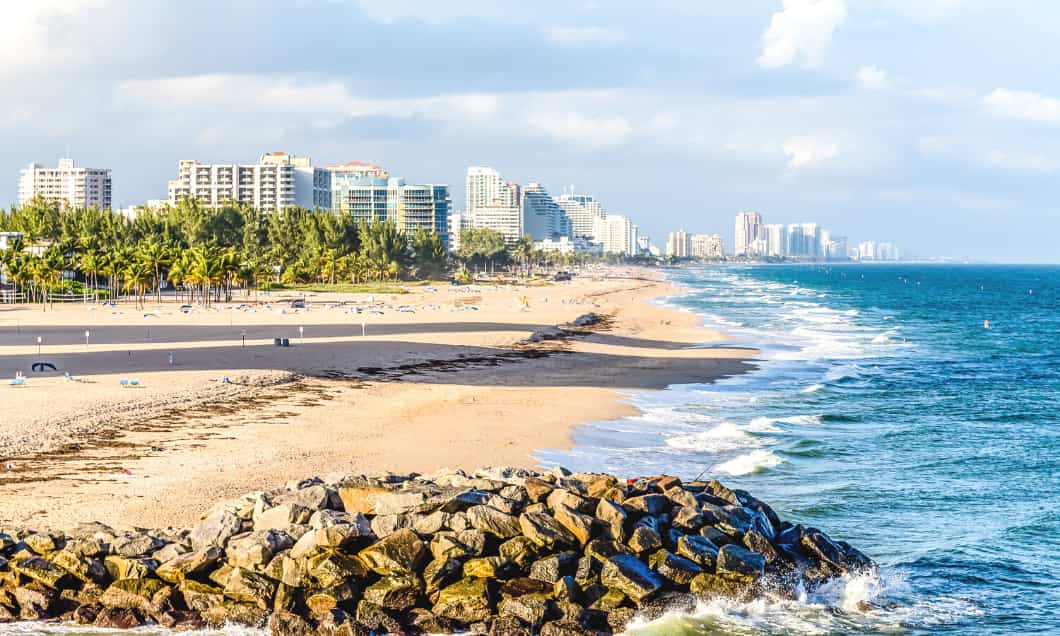 Architecture firms in Fort Lauderdale, have a lot of areas from which to draw inspiration, including equally affluent neighbours like Miami and Palm Beach. This is why you will find no shortage of impressive architectural feats in the city. Below are some of the most popular styles you will find in this luxurious waterfront city:

Fort Lauderdale is home to various luxury residents that are not constrained to any specific architectural style. The most dominant style for residents is the Mid-century Modern whose influence can be felt in the multi-million-dollar Seven Isles and the Las Olas Isles residences. Most houses will have flat, shed or butterfly roofs, asymmetrical façades, open floor plans and large expanses of metal windows. Other modern architecture Fort Lauderdale you will find in residences include sub-tropical modern, art deco style modern and art moderne among many more.

Are you looking for an Architecture firm to develop your project in Fort Lauderdale?

The Venice of America is no stranger to the resort lifestyle, offering some of the most luxurious hotels that attract millions of visitors each year. From the massive mid-century modern Conrad Fort Lauderdale Beach to the Nautical Ritz-Carlton Fort Lauderdale, affluent residents and visitors have a lot to select from when it comes to top hotel amenities and unparalleled luxury living.

In Fort Lauderdale, you will encounter some impressive mansions and estates called home by the rich and famous of the city. Unlike the smaller apartments and condos which mainly boast modern, art-deco and contemporary architecture, mansions and residential estates are mainly in the traditional and mid-century modern style. A good example of classic Fort Lauderdale mansions is The Bonnet House  built in 1920 with a wood-frame vernacular structure like most homes at the time.

"Fort Lauderdale is a city that has grown through tough times, fighting and changing from a war zone to a struggling town and finally to one of the prime neighbourhoods of South Florida. The architecture of the city works to reflect this affluence attained through many years of struggle. If you wish to indulge in the Art of living in the Yachting Capital of the World, be sure to bring your top game in terms of architecture and interior design."

Miguel Rueda Designs is an interior design and architecture Fort Lauderdale firm with years of experience in transforming homes and hotels into luxurious and comfy dream spaces. Our firm works hard in exceeding each clients expectations, by designing one of kind high-end properties.